The trail will enable people to explore the historic route through West Lothian. They will be able to walk and cycle along the route which will link up the urban areas to the local countryside. 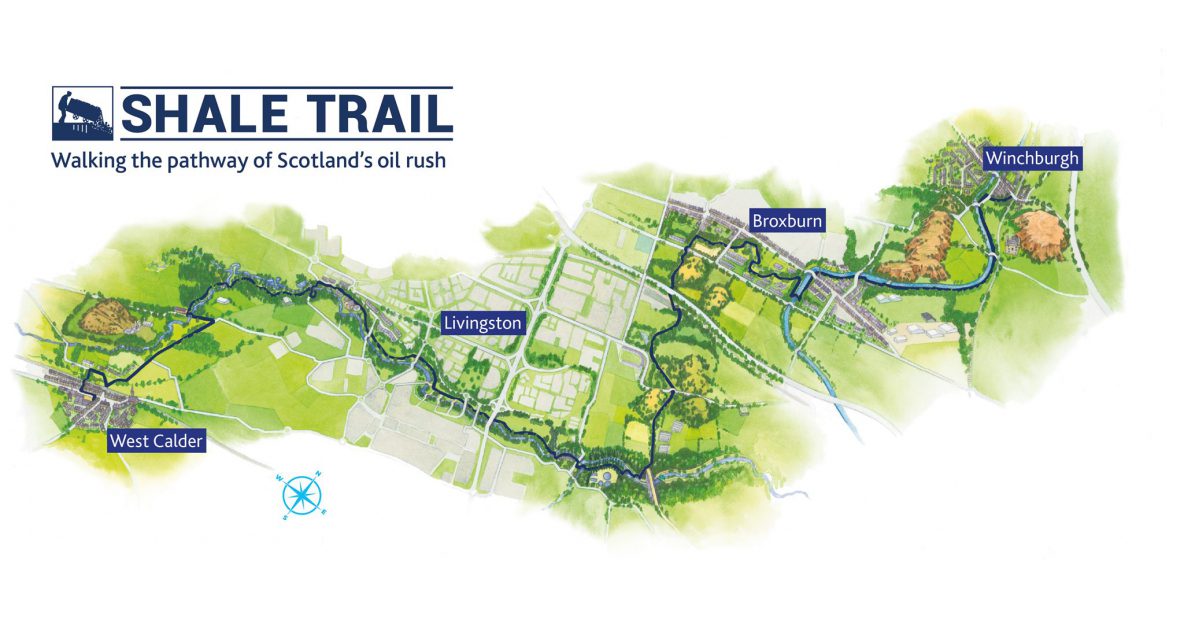 The ‘Shale Trail’ is a new route through West Lothian’s industrial past. Our aim was to create an inspiring, enjoyable off-road trail of approximately 16 miles, which will tell the oil shale story, enabling local people and visitors to engage with and learn about every aspect of local shale heritage.

The project provided the opportunity for local people to participate in an exciting activities programme, with new heritage interpretation, and all whilst getting some fresh air and recreation, perhaps on a bike ride, or walking the dog! 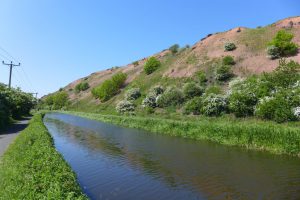 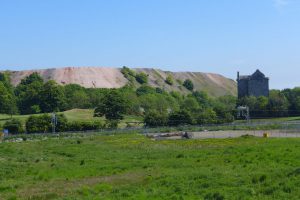 The trail stretches from West Calder in the south-west to Winchburgh in the north-east and is loosely based on the ‘Paraffin Young Heritage Trail’ which was first set up in the 1970’s for automobile users. The path has now been re-imagined for walkers and cyclists, opening access to exciting new paths. Access to Greendykes, the Five Sister bings and abandoned quarries re-inhabited by nature are particular highlights. There is historical information along the route which tells the story of the ‘Shale people’ and public art to capture the imagination, bringing communities together to celebrate their rich history.

After supportive public consultation, the preferred route between West Calder, through Livingston and Broxburn to Winchburgh, was chosen involving several  Community Development Trusts. An application was made to The National Lottery Heritage Fund which was successful with an award of almost £100,000 made towards heritage interpretation of the project and along the route.

Helen Pritchard, Depute Head Teacher at St Mary’s Primary School, Polbeth said: “We believe the Shale Trail would benefit the local community because it would allow young people to walk in the footsteps of their ancestors who worked in shale mines. It would bring our curriculum to life.”

As part of developing the 16-mile Shale Trail Walking route we created a digital presence. Much of the new website is dedicated to maps and information on the trail and its story, but a large section has been created for children and primary schools.

To help them explore the history we are ran a host of workshops with visits from a Digital journalist, to exploring how swamps made shale and understanding the world before the new light of paraffin changed our world.

The Shale Trial has been featured in a number of publications. There was an article in the Scotsman which highlighted the rich history trail and how it has been created to provide an enjoyable experience for locals and visitors. You can read the article here. It was also featured in the 2021 edition of the Earth Heritage

The Shale Trail logo has been prepared. 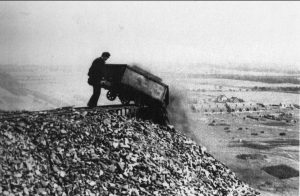 This wonderful photo inspired the logo. The photo is of a Tip Head Man who possibly had the worst of the shale industry jobs. It was the tip head man who tipped the hutches full of roasting hot spent shale onto the bings (tips) and risked being pulled down from heights of up to 200 feet by the hutches as well as being severely burned by the hot spent shale.

“The rails at the head of the tip were white-hot, and you used to have an old cap and an old piece of duster tucked in, so you bent forward and you lifted the hutch at the same time so the stuff went down the tip.”  Source: Almond Valley Heritage Trust

Watch the Shale Trails new video here created by Written in Film which gives you a brief glimpse of the trail between Winchburgh and West Calder. The Shale Trail will unlock secrets of Scotland’s first oil rush as you walk or cycle through this beautiful green corridor. You will discover what lies under your feet and find out along the way how the shale oil was made and how it shaped people lives. See how nature has reclaimed the industrial landscape.

As the Shale Trail develops, we are creating new paths and upgrading existing routes all along the 16 miles of the Trail.

The paths will help people to explore history, connect communities, create safe walking routes and allow us all to connect with nature.

In Winchburgh we have created a new path through a park. This simple path has now connected children to an isolated play park that was surrounded by a field of green and has also created a safe route away from roads for local people and walkers to access the Union Canal and the Shale Trail.

In Broxburn, there are now upgraded routes along the union canal at Port Buchanan to provide a safe route for children to walk to school.

Even in a small community, a new path can create a big difference. A new section of path near the Five Sisters Zoo in West Calder has created a safe crossing point for locals and Shale Trail users. This new path connects the communities near West Calder to the Breich Woodlands with other path route. 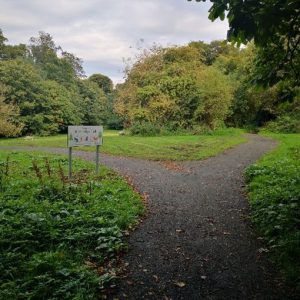 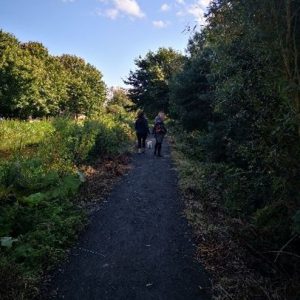 In Livingston at Simpson Park Way we have upgraded a path through the woods. We have connected Thirlfield Wynd to the Almond Valley Heritage Centre with a new path. In Wincburgh we have built a new path through Craigton Park creating access to the play park. 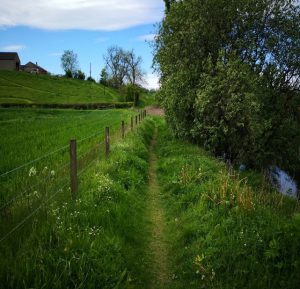 A new tarmac path has been built connecting West Calder to Mossend.

At Mossend (B7015) path upgrading works have improved access to City Farm.

The pupils of West Lothian primary schools have been helping us to compile information for the children’s section of the Shale Trail website. We want to thank the pupils and staff for all their hard work. 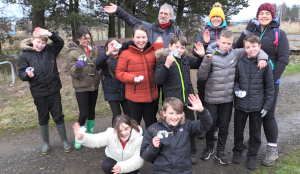 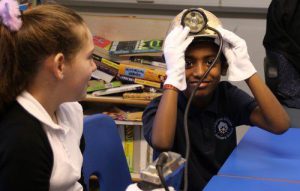 The pupils from 5 schools have become Digital Journalists to help research and create the content for the Shale Trail website. The pupils have jump back in time to 360 million years ago when shale was starting to be created in carboniferous swamps, and strange insects roamed the earth from Dragonflies with meter wide wing and centipedes over three feet long.

They have been looking at the world around them, researching and exploring our local woodlands and finding the relatives of the carboniferous animals, that still wander around, although a lot smaller. The pupils have also learnt how to use cameras and filming equipment to help them start to create short films and animations showing how shale industry developed and the strange creatures that once roamed the earth.

Shale Trail Walking Routes
To help people get out and about and exploring your local area, the team are developing a series of short walking routes which are logged on Komoot that wanders through West Lothian from West Calder to Winchburgh.

There will be wooden signs that will be placed along The Shale Trail walk. Each sign will have a QR code which will take you back in history and help you learn more about the Shale Trail and its history in West Lothian.

The Easter Breich walk has been created and supplied by the West Lothian Ramblers. The leisurely 3 mile walk begins at Easter Breich Woods in Livingston and takes you on a loop around the Shale Trail. It is an excellent way to spend a few hours outdoors and enjoy wildlife and history around you.

The West Lothian walk is a 9 mile walk beginning and ending in West Calder in West Lothian. The walk makes for an interesting and active afternoon.  The trail steps you through the industrial history of West Lothian from the Shale industry to the canals. So take a step into your local history one afternoon.

The Broxburn walk is a short Health Walk around Broxburn that helps you explore some of the Shale Trail and the history behind the Shale Industry that once thrived in the area. The Broxburn route lets you see the bings created by the industry and some of the still existing miners housing. You can start the walk at the Xcite Broxbrun Sport Centre on Church St and enjoy an hours stroll through the area. 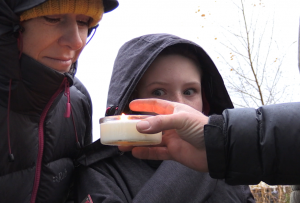 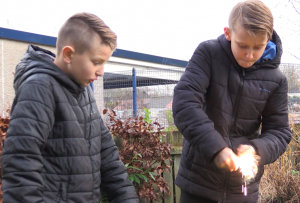 A teacher  said ‘Our John Muir Group enjoyed an amazing afternoon with the Heath & Kev from the Shale Trail. We learned a lot! Fat candles smell bad & lighting cotton wool with a flint is very tricky!! Great outdoor learning session.’

HSBC volunteers; Our first steps towards making our dream of reinvigorating the Shale Trail became a reality in September thanks to the 22 volunteers from HSBC whose excellent contribution helped prepare the initial path. 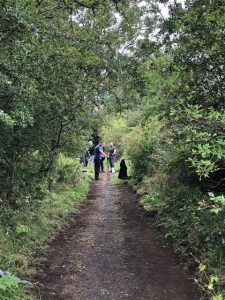 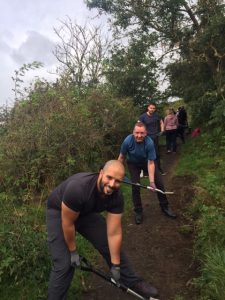 One participant said: “Thank you again for a great day yesterday, it was brilliantly organised and our teams really enjoyed the opportunity, everyone felt it was very satisfying to see the results of all their hard work during the day. We tackled part of the trail that had become overgrown and our team worked together to open the path for everyone.” 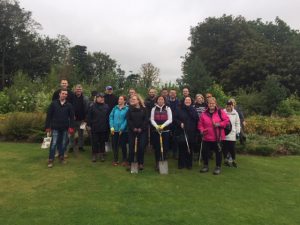 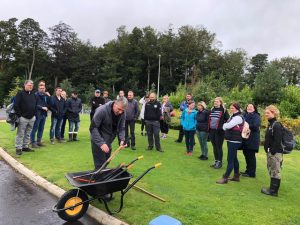 Heath Brown the Shale Trail Heritage Manager said: “it was a wonderful day and a great way to start the trial build with the dedicated volunteers from HSBC. We are hoping to create more volunteer events along the new trial, for people to get involved and learn about the history, wildlife and lives of the people who worked in the industry.”

“The shale trail is another welcome addition to the visitor experience in West Lothian but can also be used by local residents to get out and about and explore their local heritage and environment.” Cllr Tom Conn, West Lothian Council Executive spokesman for the Environment

• enable the key stakeholders to participate and have greater control on the development of green infrastructure
• raise awareness of the importance that green networks are to the local wildlife
• promote the active travel network and how it can link up with other areas in the city to encourage greater use of off road paths.
• providing opportunities for communities to come together and take part in community engagement activities.
• better understanding of the what are the key uses and links to local assets that the route could provide
• what are the potential economic benefits to creating the strategic routes.
• where the opportunities are to increase accessible greenspaces in the area.