New Living Landscape Park at Little France, Edinburgh. Improving the access to quality greenspaces for both wildlife and people 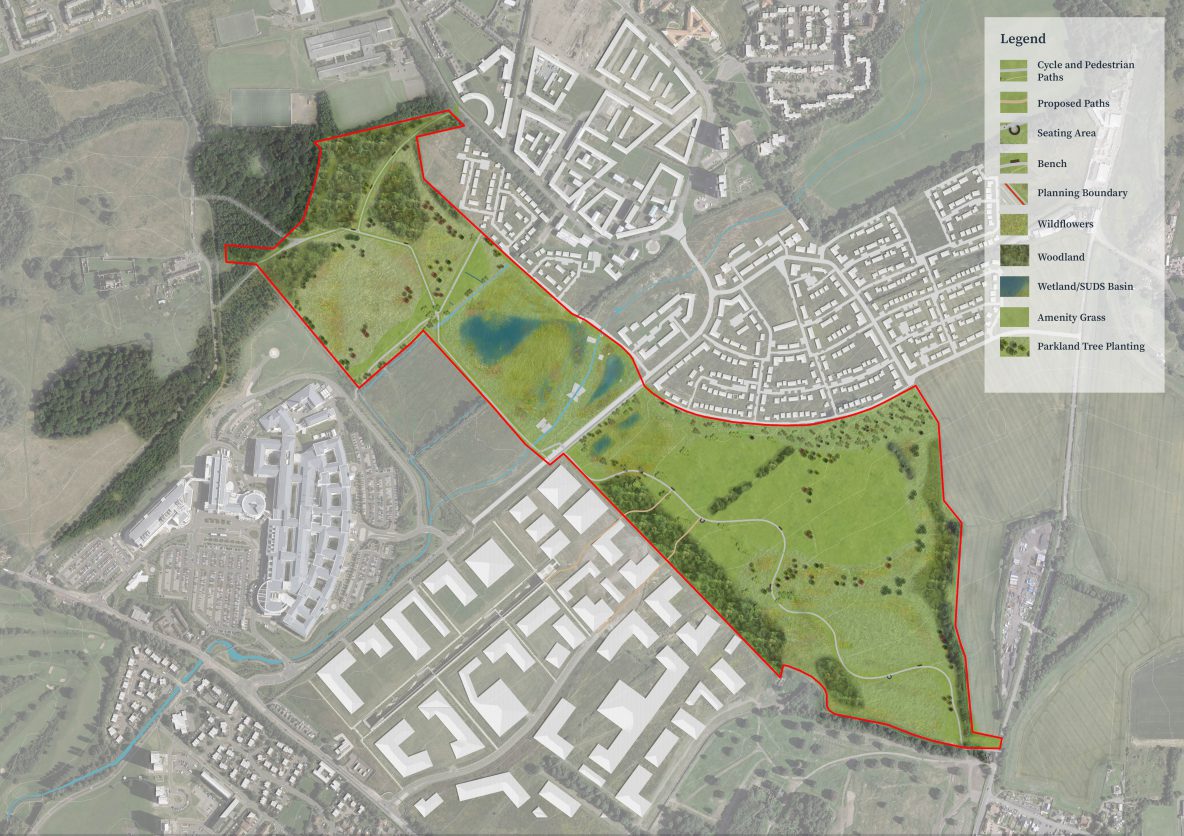 The parkland is a key piece of green infrastructure for the city and region and a crucial regeneration tool linking local communities – including Craigmillar, Greendykes and Niddrie to employment opportunities.

Here is a link to a film with Jeff Stevenson from the Friends of Little France Park which was produced by James Ward.

Little France Park became a nature reserves after plans were approved by the Culture and Communities Committee in 2021.

A Local Nature Reserve (LNR) is an area of land declared by a local authority because of its special nature interest and/or educational value. It is hoped the status, which is already held by seven sites across the Capital, will add more weight to funding bids and offer extra protection from future development.

The active travel route and park project which is valued at over £1.4m, has been delivered by ELGT on behalf of the City of Edinburgh Council. It was primarily funded by Transport Scotland through Sustrans’ Scotland’s Community Links programme, with match funding from a range of partners including the City of Edinburgh Council, NHS and Scottish Enterprise. The new 2.983km route formalises existing paths in order to link with new and proposed housing developments in the south east of the city, and beyond to the city centre and Craigmillar. It provides a core cycling and walking route, linking the new neighbourhoods as they come on stream to existing residential and employment areas as well as the new Shawfair railway station on the Borders rail line. This project is an excellent example of where development of an ambitious active travel route can achieve a whole range of outcomes, including transport connectivity, public health benefits and environmental improvements. It also provides links between areas that are socially disadvantaged with opportunities for employment. It has also been used as a Central Scotland Green Network case study http://www.centralscotlandgreennetwork.org/campaigns/green-active-travel/green-active-travel-2

The new active travel routes deliver links to the parkland, encouraging its use for recreation, informal sports and events. It also  helps link up the housing developments to a proposed new town centre in Craigmillar, proving employment prospects at the Royal Infirmary and the Edinburgh BioQuarter, medical facilities and to existing schools. It helps create a new landscape setting for the city providing opportunities for outdoor recreation which brings social and health benefits to this area. The parkland will be an important part of the green network, providing a focus for local and sub-regional leisure and amenity, improved connectivity and enhanced biodiversity.

ELGT have planted butterfly planters in Little France Park as part of the Butterflies Project. The planters contain common rock-rose which is the primary food for Brown Argus butterfly caterpillars. The project provides a linear habitat niche for this butterfly to support travel across sites with planters linking Little France Park and Craigmillar Castle Park to the local population of butterflies in Arthur Seat. 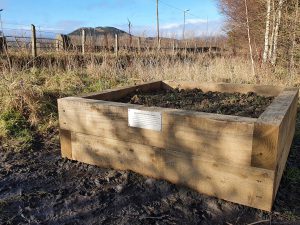 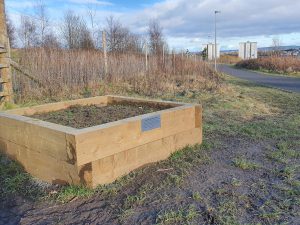 We had an amazing response to our Halloween Adventure Competition. It was fantastic to see all your great photos, costumes and hearing about your adventures, so thank you to everyone who entered.

Congratulations to the winner The Ord family, The Fitzgerald family and The Cox family.

We had some great feedback from those who took part in the competition!

“The area has been transformed by the Trust and it has really paid off!”
Kids had a great time exploring Little France Park, many thanks for the great trail and amazing cycle path.”
“Thanks for putting on such a great halloween trail. The kids said they loved finding monsters and pumpkins and now want to visit the castles””
“Had a great day exploring Little France Park” 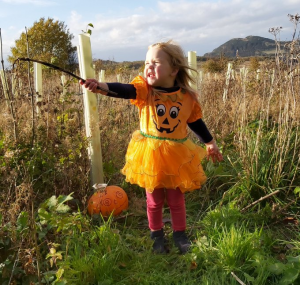 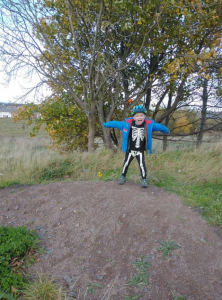 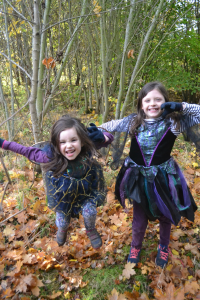 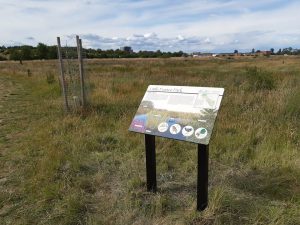 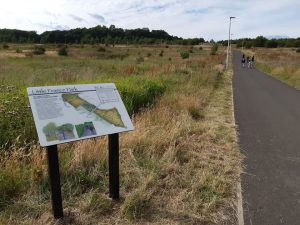 Biodiversity Improvements
Following support from Scottish Natural Heritage through the Biodiversity Challenge Fund we have been able to improve the biodiversity of the park. The project aims to improve the soils nutrient content of the area and to plant wildflowers which are invaluable to insect pollinators. It rejuvenates a once unused green land into a flourishing and revitalised habitat for birds and wildlife to enjoy. 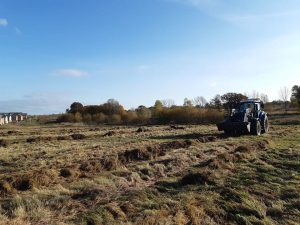 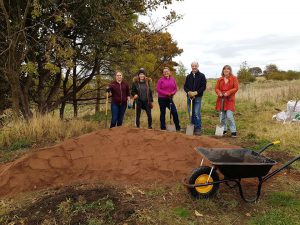 The work involved the creation of wildflower meadows which is a big step towards making the area a beacon for wildlife in the heart of Edinburgh, turning a once derelict space into a green utopia. We installed 710m of hedge planting to help create a habitat for nesting birds. It also involved the creation of ‘Solitary Bee Nesting’ sites across two small areas by spreading sand, gravel and grit in piles to help accommodate the species. The structure will provide important habitat for solitary bees and other pollinator species.

A big thank you to volunteers from the Scottish Government, the Peregrine Group and staff from CEC Natural Heritage Service for building Little France Park’s first bee bank.

ELGT worked in partnership with the City of Edinburgh to plant 3 hectares of land as part of a woodland planting project. This involved securing funding from a SRDP grant to plant up Native Broad-leaves and Scots pine. We engaged the local community to help plant over 7,700 new trees as part of the woodland creation which involved over 300 volunteers.

Thanks also to funding from Tree for Cities, we have planted up over 700 tree samplings with help from volunteers from Postcode Lottery and the local Friends of parks group. 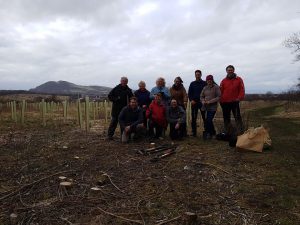 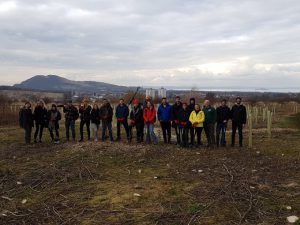 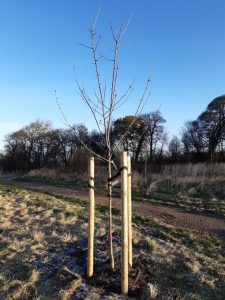 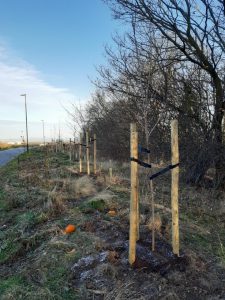 As part of the development of the park, standard specimen trees have been planted.

The local community and schools have been using the park and taken part in the Edinburgh Living Landscape wildlife week activities with sessions run by SWT, CEC Natural Heritage Service and Buglife.

“This is a fantastic development for this rapidly evolving part of the city, which will not only encourage active travel but will open up a whole new area of parkland for local people. As the project progresses I look forward to more and more people enjoying the natural surroundings, and it’s great to see young park users getting involved already" Transport and Environment Convener, Councillor Lesley McInnes